Combinations and their cost

Straight
Set of cards ordered according to their ranks or professions. Ace can participate in combinations of court cards (Queen-King-Ace) and numbers (Ace-Deuce-Three). Combinations through Ace (Queen-King-Ace-Deuce) are prohibited.
Quads
Набор карт одинакового достоинства или профессии. 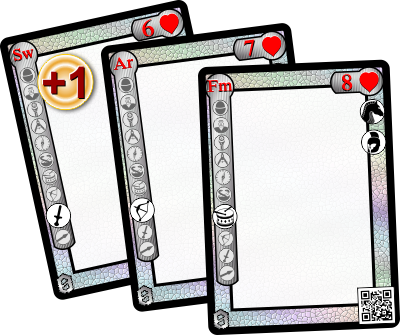 The length of combination is the amount of cards in it.

Basic cost of combination equals to the total strength of the cards in it. In addition, the card and / or combination may generally be subject to effects increasing or decreasing the basic cost.

The final cost is determined as follows: the base cost is multiplied by 2 for each additional form of combinations and 3, if the cards in combination are of the same suit (flash). This rule is only used for the combinations consisting of three or more cards.

The final value of the attacking and defensive combinations is, respectively, points for attack and defence, which the player can dispose of.

Combinations formation, activation of effects and payment of their value.

Any effect provides an indication of any action. The timing of this action is indicated in the text of effect, or, in the absence of such guidance, it occurs immediately after the effect granting.

Individual effects can demand payment by points of attack and/or defence. The calculation of attack/defence points earned and spent is made in the phase of combinations cost calculation. If the number of points spent is more than point earned, then for every "extra" point spent the player is deducted with three points of life.

Standard effects payment is the formation of an attacking and/or defensive combination of three or more cards length. Event of combination formation and effects activation of their forming card is considered a single and enters the main stack. Activated effects fall into their respective stacks. If all combinations, formed by the chosen card, were killed, the action of standard and free individual effects are cancelled.