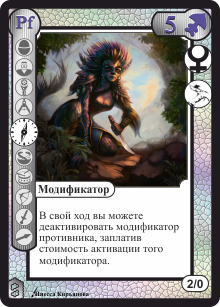 Composition of the deck and properties of cards 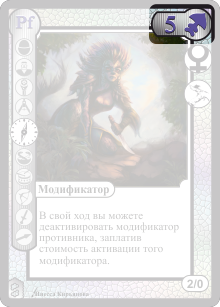 Draker deck consists of 84 cards. The traditional card suits are added with two "magic" ones: elves and gnomes. The seniority of suits is the following: 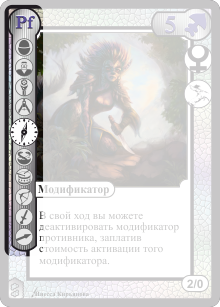 The usual mandatory characteristics of the card, its rank and suit, are added with one more - military specialty or profession. Each card is assigned its own profession, but they can change from edition to edition. For example, in zero publication queen of spades has pathfinder profession while in others it may have another profession. Professions are ranged in the same manner as cards rank. 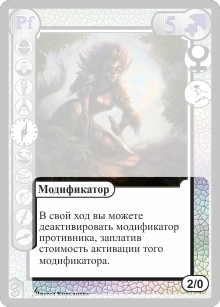 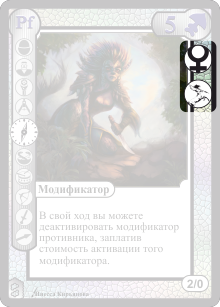 Besides professions, the card can possess additional features - the effects affecting the further course of the game. The effects may be standard, marked with icons right below the suit, and individual, that is a text description at the bottom of the card. The individual effect is indicated with its type, text description and activation cost. Activation cost is represented by two numbers in the card lower right corner. The first number is the number of attack points, the second - the number of defence points, necessary for this effect. For individual effects, the golden rule is applied: the text of the card has an absolute priority over the rules. Individual effect can demand payment with attack and/or defence points, earned during the formation of combinations (hands).

Apart from the usual cards for each suit, there is a special card - Artefact. During his turn, a player can assign the Artefact from his pool any rank and/or profession, so the Artefact becomes a game card. Rank and profession of the Artefact got in a common pool may be assigned by any player in his turn, if in the current round nobody did that before. There is a limitation: you cannot assign Artefact any rank of an already open card of this suit. That is, there cannot be two identical cards on the table. Moreover, if during the game the card, which coincides with the Artefact, opens the last is "killed" - its denomination and profession is void, as well as the combination(s), in which it took part. Effects of artefacts are already shown on it and cannot be overridden. The effect of the artefact appointment is considered immediately and enters the corresponding stack.

Flight. Simple effect: the attack combination can only block the defensive combination with the same effect of flight.

Rider. Simple effect: clears any one effect of any target open card. Target card and its clearable effect can be specified later in the round.

Standard bearer. Simple effect: allows to use any opponent’s card if it is not the standard bearer in a cut of not less than three cards. When this happens, for the owner of the card, it is considered to be killed in this round. Target card is declared immediately after formation of the combination, activated the effect.

Unicorn. Feature: the card cannot be subject to any effects of the opponent (including standard bearer and rider). Exceptions: Effects the aim of which is a random card and effects aimed at all of the cards, satisfying any conditions. If the unicorn is the first card of the common pool, the effect of the unicorn is acquired by all cards formed by any combination of the unicorn.

Each card may have several or none standard effects.

Both standard and individual effects can be of the following types:

Permanent effect
on-going (permanent) effect. It is granted immediately after the card opening, misses stacks. Valid until the card is opened and is in one of the pools.
Instant effect
granted in the stack of instant effects until the start of simple effects.
Modifier
similar to a Permanent effect, but requires the activation of payment, which falls in the main stack as a normal effect. Modifier starts acting after activation allowing in the stack, the end of the modifier action - removal of the card from the player’s pool or a common pool.
Simple effect
effect not identified as one of the previous ones. Falls and granted into the main stack, it is indicated by the word «Effect» on the card.